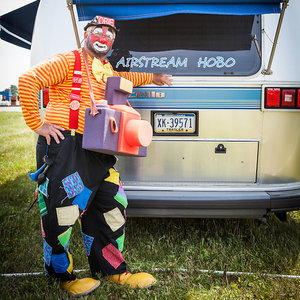 “I brought a turkey sandwich for lunch. Would you like to see the turkey?” A clown is standing between two silver trailers gleaming in the summer sun, surrounded by children. He holds out a clearly-fake sandwich and pulls apart the slices of “bread” – revealing a mirror to the little boy standing closest, who takes the insult in stride with a giggle.

“I’ve been clowning around all my life,” says Dennis Ober, who’s better known as Obie to his friends and fans. But he didn’t start clowning with makeup and props until 1990. A friend – Mike Graham, or Sparky – dressed up for a local farm parade, and Obie’s interest was piqued. He called Sparky the next day with questions – how do you get started as a clown? “He took me under his wing,” Obie says. “He’s still my mentor.” Obie kept asking questions, and they went from conference to convention continuing to get Obie more and more into the world of clowning. “From day 1, it was continuous growth,” he says.

Once he was in the community, Obie started bringing clowning into his everyday life. His diverse volunteering background helped – he was already involved in teaching fire prevention as a part of a local firefighting club, as well as a yearly truck convoy for the Make-A-Wish Foundation. So Obie the Clown started showing up.

“It’s a fun teaching tool,” says Obie. As a fire prevention performer, he visits schools and fire stations around the area, doing 45-minute shows for kids. He demonstrates things like the stop-drop-and-roll method and dialing 911 in his own unique way – using a giant prop phone, for example.

Obie had been involved with Make-A-Wish for a couple of years before he started clowning, but his involvement changed when Obie the Clown came. Obie entertained the kids before the convoy parade, and then while the children took their rides in the parade, he’d collect donations for the foundation from the crowd. Eventually Obie and Sparky started training other clowns to help, and today over 150 clowns have worked the convoy with them. Last year they raised over $15,000 for the foundation.

Obie also spends time at other Make-A-Wish events, like trips to the Give Kids The World Village at Walt Disney World. There kids whose wishes include meeting Cinderella or Mickey Mouse can come and stay for free, and enjoy the parks along with special entertainment just for them. This includes performances from clowns like Obie, who spent a three-week “working vacation” at the resort last year.

“It’s so nice to see the smiles on the kids’ faces and their families, they can just forget their troubles for a little bit,” Obie says. “Obie the Clown gets me in the door, and then I can help people.” 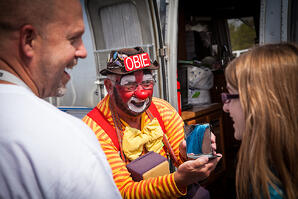 When Obie travels – to give a demonstration, or to entertain at a place like Give Kids The World – he does it in an Airstream like the one he took to Alumapalooza. His current trailer is his fifth, and he’s been an Airstreamer since 1990 – the same year he started appearing as Obie the Clown. He’d seen them for years while camping, and “had always liked the look of them.”

“The biggest draw to me is that they have rallies nationwide,” says Obie. “It’s opened up a lot of doors. There’s so many places and things I never would have seen without Airstream. It’s a little taste of America.”

He’s gotten involved in the Airstream community just as he did the clowning community – with full commitment. Obie has been a member of the Wally Byam Caravan Club International for years, and has even served as president of the Central Pennsylvania unit near his home in Manheim. And he doesn’t plan to stop moving anytime soon.