Putting the Pedal Down on Child Abuse and Homelessness 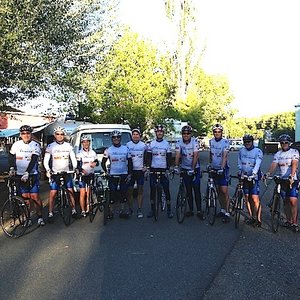 Ted Davis, had an idea and a vision when he put together TEAM AIRSTREAM. His idea was to gather a group of people who loved cycling and would help him raise $20,000 for neglected and abused kids. He had a vision of flying down the road, wind blowing and a stream of riders with him, all trying to capture the ultimate freedom that you get from the road. That feeling of freedom has brought him a love of riding since he was a child.  His thought was that every child should feel the joy and memories of simply being a child and he wanted an event that showed his passion to protect and improve their lives locally.

The 2013 TEAM AIRSTREAM Cycle Oregon crew was a varied group of people with different jobs and lives who came from all over Oregon, Hawaii and Ontario Canada.  Some of the riders were well versed on the road and cycling while others were just novices with a will and desire to be a part of the team. There was fun to be had and memories to make but at the heart of it all was a larger picture and a greater goal to help 2 local charities, Children’s Center and New Avenues for Youth in Portland, OR.

TEAM AIRSTREAM’S theme was “Put the Pedal Down on Child Abuse and Homelessness”   Raising awareness wherever they went and the goal of $20,000 would be the fuel for these riders through the week long ride. Through the TEAM AIRSTREAM.com website each rider was sponsored per mile that they rode.  Starting each day riding out on the long open stretches of Eastern Oregon highway and throughout towns like John Day, Burns, Diamond (population 5) Seneca Oregon.  The entire event involved over 2200 riders with many riding over 500 miles from September 7-14th.  Each stop had tents as far as you could see and a tribe of cyclist had formed in the high Oregon desert.

Those who know the iconic Airstream history well enough, can envision a modern day Wally Byam caravan, the same silver shine and new industry advances, drawing excitement and awe as it winds it’s way through the towns and open roads.  Just as Wally did in the beginning, Team Airstream drew attention along the way with other riders wanting to ride with the group and coming by to visit at each camp spot. Memories of all at the event will now have that Airstream feeling of nostalgia.

By the end of the week friendships were made and strengthened, stories were ready to be  passed along and TEAM AIRSTREAM was exhausted, sore and yet still exhilarated by the freedom of the road.  They had exceeded the goal set and had raised over $21,000 for Children’s Center and New Avenues for Youth.  The thrill of the ride was still fresh yet it was time to pack up the Airstream caravan and head home to their families. There are of course plans already for TEAM AIRSTREAM to ride again next year.  The freedom of the ride is too great to ignore.