Here's One Way to Court Adventure... 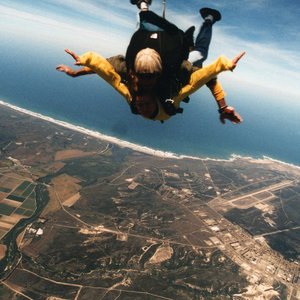 So I have this friend Kathi. At age 52 she jumped out of a plane to give herself a life jolt. My words, not hers. It served its purpose.

Lately she’s been thinking she needs another life jolt. So she tells her husband, whose employment often brings him to other parts of the world, that if an opportunity comes up for an extended assignment somewhere she’s up for it.

Within days he calls her from work essentially asking, “Did you mean it?”

Two weeks later – yes, you read that right – they are living in Abu Dhabi. It’s for a year or so.

Way to court adventure. Oh yeah. Lean in to the energy that’s coming from the gut you’ve learned to trust. Maybe it will present you with a challenge. Maybe that challenge is located in the Middle East.

One of her self-described strengths is being uber organized. She gets the news and is instantly set in motion with tasks. Within 24 hours of arriving in Abu Dhabi she has already begun chronicling the experience -- her new digs, some historical facts, etc. The blog has a quote prominently placed: “The only thing you live to regret are the risks you didn’t take.”

There’s a song by Florence and the Machine called “Shake It Out” and it begins like this:

It goes on to say:

Shake them off, those regrets. And then, moving forward, be mindful of not adding any more to the pile. The song calls for letting go of the past. What a great way to set the stage for a move closer to living riveted.

So, yes, put it out there. Give it life. Express away.

But then be ready when the wish comes true. Because, whoa Nelly, you may have to actually live the dream.

Or at the very least, get a life jolt you couldn’t have imagined.