A Book of Their Own 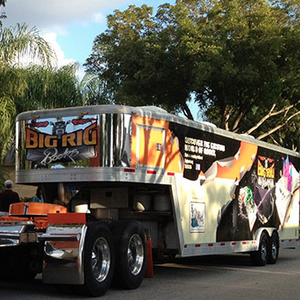 John Gervase had a simple retirement goal – that he and his wife, Kathy, be financially comfortable and have freedom. He never imagined achieving that goal would involve an Airstream and furnishing books to under-served children.

The founder of Big Rig Books just turned 51 and he has created a terrific life that neatly intersects his love of trucking and his desire to serve. It includes six months in Florida and six months in Illinois each year, a transition from operating the gas stations he owns to becoming a commercial landlord and leasing them, and pulling up to schools with a truckload of books.

“There are a lot of them,” he says in our recent interview when I ask him to tell me a story from his travels. “I don’t know if there’s a standout.”

There is magic in that. What has happened is the experiences have melded into one pervasive insight.

“We were at a school today,” he says. “These kids just get excited about getting a book. I took it for granted, the availability of books. This has really humbled me. It’s been a real eye opener.”

It was early 2013 that Big Rig Books was born. After what Gervase calls “pretty good success early in life” and paying his dues, he felt a strong need to give back. He had bought a semi truck “just to have fun with” and decided to dip his feet into the trucking world. In 2009 he started Haulin’ for Humanity, a 501 (c)(3) non-profit that, according to his website, “provided low cost trucking services to other non-profits and churches.”

In the meantime, Gervase and his wife used their retirement money to buy a home in Fort Myers, Fla. With family in Illinois, going back and forth between those two destinations was a natural. While in Illinois a few years ago at a benefit his daughter was involved with, he noted the emphasis on books. Later research showed him the direct relationship between literacy and poverty.

He decided to fill it with books. Nine months after that realization, he and Kathy started delivering those books to schools and by the end of 2013 they had given away over 30,000 of them. They aim to serve two schools a week.

“I look at it as a part-time ministry, a charitable thing,” Gervase says. “Serving these kids, pre-school to high school, is an honor. We try to see these kids multiple times so they can build libraries.”

He has also been struck by the positive effect of parents seeing books carried into their homes by their children. Influence can go both ways.

It makes what can often be frustrating worth the time and effort. They get lots of book donations and have benefitted from book drives. A woman who saw Big Rig Books on Facebook even hosted a drive at the United Center in Chicago. Gervase’s garage is “overflowing” with books. But funding hasn’t come in the way he’d expected.

“It hasn’t happened,” he says.

Also, he’s found that cold calling can be difficult because people are skeptical of his intent. He does the research on websites that give information about Title I schools, compiles a list and then reaches out.

“I tell them to look at our website and testimonials,” Gervase says. “Sometimes they need to be convinced there is no catch.”

Still, as Big Rig Books heads into its second year, Gervase has it down. The Airstream Interstate, with special shelves he built, is used for transporting books and even to pull into smaller schools. For bigger schools, he uses the truck.

A simple retirement goal realized and then some.