Forging a Family On the Road 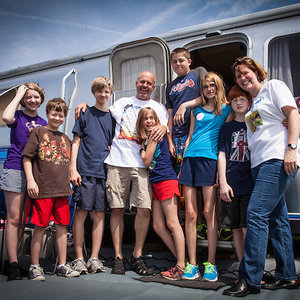 Most things the Schulz-Ditchen family has, they designed and built themselves – including the family itself. Rob and Katie met several years ago when Katie hired Rob to build an apartment in her house, and by the time it was finished he was the first tenant. They married three years ago, and then had to undertake the task of merging their families. In any situation like that there are hurdles, but with seven children, it was tougher. Luckily, they had Airstream.

“The forced togetherness of travelling is a big part of what brought us together as a family,” Katie said.

The family lives outside of Atlanta, but life in the city isn’t quite what Rob and Katie were used to as kids themselves. Both grew up in small towns, and while they like where they live now, something’s missing. They can find that on the road, in the Airstream community. “It’s a little bit of a small-town environment, a little of how we grew up,” Katie said. “I think this is a good way to grow up.”

The trailer the Schulz-Ditchens use is specially remodeled for their use. Rob installed everything from three-a-stack cots for the kids to sleep on to couches with fold-out beds, a dishwasher, a new sink, and an oven.

“The furniture was literally putting square pegs in a round hole,” Rob said. “You can’t see how much I chopped off.” But with the renovations, the Schulz-Ditchen Airstream can fit the whole family (and more), and it fits them perfectly. And when you’re raising seven children, fitting is the most important thing.