The key is to actually do as well. 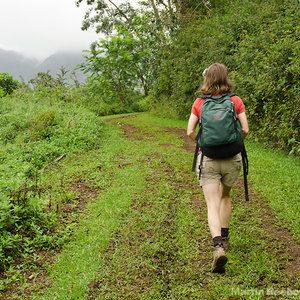 Every so often people in my life will talk about their love of hiking or ask me to go on a hike with them. I always laugh. Like, out loud at the preposterousness of the idea.

Suburban girl to urban woman. That’s me. Outdoors to me is a beach and there better be a chair between my butt and the sand. I recall a Sex and the City episode where Carrie similarly declares her lack of outdoorsy-ness, but then the David Duchovny character explains that hiking is actually a fancy word for walking.

I decided to join a friend recently for a short stay in her home in a Bavarian village about an hour outside of Munich. It is nestled among grand mountains and expansive farms, thick forest and flowing river. And I knew at the very least I’d want to take walks while there.

A friend offered me her hiking boots. We wear the same size. A generous offer, but really? Was I going to pretend to be outdoorsy? Still, I opened to the idea and prior to the trip she brought them over along with some socks.

I packed them and wore them on the trip. I’d like to say I scaled a mountain and did the Rocky fists-in-the-air dance and give this story a really dramatic ending, but that isn’t the case. I wore them to walk through a forest and there was a little bit of rocky ground that, given the knee issues I’ve had the last few years, made me glad I had the excellent support.

The boots wound up representing a letting go and an expanding of self. Limiting beliefs about image and capability. And why? I was making a big deal of something so simple. If I want to walk in the woods, I’ll walk in the woods. Just because I’ve not done it much before or may not be inclined to do it often doesn’t mean I can’t occasionally enjoy it.

Just putting this in writing I’m aware there are those who will read this and think I’m a prima donna. So be it. They’re right in some respects. I can own that. I’m a bit of a girlie girl, as the expression goes. Come on over and check out my Barbie books. There’s a whole shelf of them.

Hmmmm … I’ll bet somewhere on those pages she’s wearing a hiking outfit. Me and Barbie, we like to look the part.

The key is to actually do as well.