Globetrotting on the Living Room Carpet 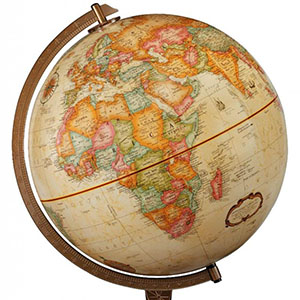 After we’ve finished Thanksgiving dinner, my niece hands me a small plastic airplane and I simulate its flight through the air.

There is only one answer in her world. A 10-year-old on the autism spectrum, she just accompanied her parents to the Dominican Republic on her fall vacation from school. It was her first plane ride.

“She has to buckle her seatbelt,” she says of the imaginary passenger. “Or the pilot will ask her to leave.”

I chuckle and draw her out on more details – the beach, the pool, the shows at their resort. But as autistic children are wont to do, she keeps telling the same story and I’m ready for a change. We’re on the floor. Her hundreds of Silly Bandz are clustered in a little portable case and her Barbie doll is sitting in a pink convertible.

“Where is Lola going?” I ask, using the name she’s assigned Barbie.

“To school,” she says, rattling off a list of subjects that are rote to her.

That gets old, too, after a while, so I start taking her on a journey with the plane and the car.

“How about Lola drives to California?” I say.

Gina repeats it. Then we spell it. I can see her processing it.

“Or New York? What could she see there?”

She brightens at the idea of the Statue of Liberty and the Empire State Building.

I make a fuss about Lola not wearing her seatbelt and we buckle her in. Then Gina’s pulling out Silly Bandz shaped liked kangaroos. About eight of them. My mind goes back to the plane.

“Do you know where there are lots of kangaroos?” I ask and then answer all in one breath, “Australia.”

She repeats it. We spell it a few times. I let her go back to some of her old storylines and then gently lead her back to mine.

“Where are there lots of kangaroos?” I ask.

“Or the plane could go to Paris,” I say. “What could she see in Paris?”

“The Eiffel Tower,” she says. This one she learned a while ago thanks to some t-shirts she’s owned. She can spell it, too.

I offer up London and Big Ben as another option. She’s pulling out Silly Bandz shaped like monkeys now. We’re on to Africa.

I circle back to some we’ve already mentioned to see if I’m overloading her. She excitedly recites them on cue.

It occurs to me that I’m working out my own travel fantasies on this impressionable kid and it’s fantastic, if manipulative. She’s so darned smart.

I’m thinking about the holidays and what to get her for Christmas. Gina finds joy in most things, really. Barbie, a.k.a. Lola, can always use more shoes. I could rock the kid out in some fun clothes.

Then I have the light bulb moment.

I decide I’m getting her a globe for Christmas. It’s perfect. Adventure awaits for both of us.