C Is For Caravan 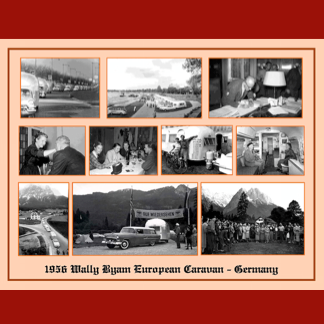 There’s no doubt that Airstreamers have an inherent love for travel and adventure. Plus, Airstreaming creates a community that is unlike any other. For many Airstreamers, the opportunity to travel WITH their community is the perfect combination. That’s where caravans come in.

A caravan is “any group that travels together with a starting point and an ending point.” In the Airstream realm of the word, a caravan is a group of enthusiastic Airstreamers traveling, exploring and living riveted together from one destination to another. We got to chat with Dale Schwamborn, family member of Wally Byam, member of the first ever Airstream caravan, and Airstream historian and raconteur to learn more about caravans then and now.

A bit of background: In November 1951, the first Airstream Wally Byam Caravan went to Mexico and Central America. Wally’s caravans were opened to all manufactured trailers until 1955 when the Wally Byam Caravan Club was formed. After that all “caravans” were exclusively for Airstream owners belonging to the WBCCI.

Wally Byam always differentiated between travel trailers and house trailers. Caravans demonstrated that travel trailers were specifically for travel – and more importantly, caravans taught people to travel. As a group, Airstreamers from all of the nation (and world) would join together and travel to various locations.

Travel aside, there are valuable benefits to caravanning, some of which include: making lifelong friendships, visiting new places, and having the chance to experience activities with the group that most individual travelers would not have the chance to do alone.

Among Dale’s favorite Caravan memories include:

Dale showed us that when caravanning, there are endless amazing memories to be had!

Have you ever participated in a caravan? If so, what is your favorite memory? If you haven’t, what would be your ideal caravan? Comment with your answer!

If you would like to join a caravan, your first step is to become an Airstream owner! Once you have become a proud owner of an iconic and legendary Airstream, join the Wally Byam Caravan Club, International (WBBCI).

The Club offers eye-catching caravans throughout the U.S. to suit your travel dreams. On top of it, you’re guaranteed to make some great friendships and build your love for Airstreams even more. According to Dale, “Caravans are a win, win situation.”

So, get out there and #LiveRiveted!