Not everyone buys an Airstream because the siren song of full-time nomadic living has called them. Some people consider an Airstream an investment in simplicity—a way to shed the weight of conventional living in favor of a more simplified life. Deke and Tiffani Waters are two such people. The two worked at the same company: Tiffani was in human resources, Deke was a computer game producer she recruited. Over time they got to know each other, and eventually married, and that is when their journey to simplicity truly began. 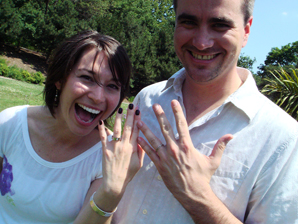 Opposites attract, and the spark of their different lifestyles may have played a role in their initial vision of what constituted happiness, Deke admitted. “I’ve always lived a pretty simple lifestyle,” Tiffani said. “And I’ve always been a huge consumer. Loved my toys,” Deke said. He admitted he had expensive tastes and was a major consumer of anything electronic. “When I moved into Tiffani’s apartment after we got married I think the electric bill quadrupled,” he said.

Tiffani’s 600-square foot, one bedroom apartment proved too small for two adults—one with an addiction to electronics and computers, plus their dog, and their combined furniture, books and clothes. They did what any young married couple did: they went out and bought a larger condo, 2.5 bedrooms, to hold all their stuff. Then they continued to do what many married couples in their early 30s do—accumulate more stuff in pursuit of happiness.

“We were both working and doing our thing,” Deke said, “And then we took a vacation and everything changed.” In 2009 they took a trip to a little island off the Yucatan Peninsula called Isla Holbox. They spent a week without phones, work, office pressures and stress. In the place of stress they found people who “exuded fulfilled lives.” 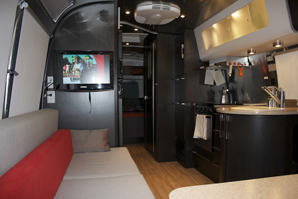 “It was great,” Tiffani said. “We just fell in love with the simplicity.” She had always loved simplicity, but as a couple they’d never experienced such happiness in just being together, being with friends and seeing the possibilities of a life different than what they were living.

“I couldn’t believe how many of the people we met were truly happy, I mean soulfully content. And they weren’t living anything like we were in Chicago. We talked about it on the way home and decided then to simplify our lives,” Deke said. “For the first time, my wife and I clearly saw what’s possible when you find a way to follow your passion and do exactly what you love all day, every day.”

Once they got home they created a 5-year plan for their lives, along with a list of “must haves,” for the relationship.

They also wanted to travel. So they decided an Airstream was the best solution to living and working the dream life. They already owned a 22’ Airstream and considered living in it full-time, but decided to upgrade to a new 27-foot Airstream CCD.

While the two waited on delivery of their new trailer they began the big purge of their condo. A lifelong consumer, Deke admitted that he was a “stuff collector,” and had brought his materialism into the marriage. “We realized we were just collecting a lot of material things and we didn’t need them. They weren’t what was really important to us,” Deke said. “The mortgage, car payments, furniture, books, clothes—everything added up to more stuff.”

For the next year they sold everything they could and gave away what they couldn’t sell. They rented their condo and have begun moving to their new Airstream, at an RV park in Texas. Even with their life in boxes and more things to do before the big move, they’re still excited about their adventure.

To help make it easier for others who want to simplify as well, the couple started a blog (at weaselmouth.com) about the process: where to sell things, how to purge, and life as full-timers working full-time jobs while living in a mostly permanent location.