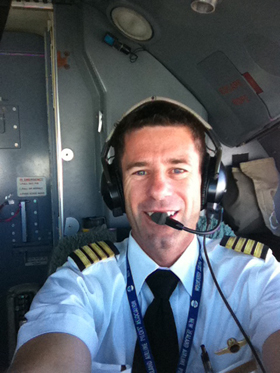 Chuck List, 41, lives in one silver aluminum tube, a 2005 International CCD Airstream, and works in another, a commercial airplane. List, a pilot for SkyWest Airlines, is living the Airstream adventure in a way few do: He works 16 to 18 days a month, usually four days at a time, flying around the country. Then he returns to his Airstream to continue his journey on the ground.

“It’s almost a moral imperative to live like this,” he said. “The airline provides me the kind of things I need to sustain a mobile lifestyle. I don’t have to think about going home at the end of a trip. I can just jumpseat anywhere in the country for free and that gets me back to wherever I want to go. When most people end their vacation, they have to think about flying home and going back to work. For me, it’s like going to work then flying back to my vacation.”

Thanks to his acquisition of an Airstream last year, he can travel on the ground portion of his life in style. “I was a voracious VW Westfalia fan for years. I would park my van at the nearest airport, jumpseat to where I was flying, then jumpseat back to wherever I left my van and keep going,” List said. “Then I realized I had a really unique ability to stay out on the road. The whole idea of paying heat and cooling on a house when I’m only there on an average of six or seven days a month—I decided to just move into an Airstream. It’s so iconic. It’s so esthetically pleasing. It wasn’t a hard choice.”

Last year List bought an International CCD, making the jump from van to Airstream. Like many who see the CCD, he preferred its modern lines, and the well-designed and luxurious interior. He took a month off from hiking and traveling to put a cork floor in the trailer and add bamboo countertops, making it uniquely his. And now, he says he loves it even more. List also loves to ski, bike, and hike. He enjoys his time off and the Airstream fits hand-in-glove with his passions.

“I’m a big skier. I’m a lifestyle guy. That’s why I bought the Airstream,” he said. “I wanted to have a nice place to live and a place to store my equipment—the bikes, skis and gear.” He stores the gear in his Toyota Tundra, and calls the Airstream base camp.

List parks his Airstream around the country – typically for a month at a time at any one place. He dry-camps, off the grid. He has the freedom to move from warm to cold, but prefers to leave the trailer in warmer climates so the water doesn’t freeze when he’s away working.

“Keep in mind I fly 16 to 18 days a month,” he said. The rest of that month is spent in the area exploring, hiking, cycling and enjoying the great outdoors. Don’t worry: He doesn’t get lonely. He’s dating a doctor who works half-time and shares his passion for the outdoors and the mobile lifestyle. “She likes the same things, sports, the outdoors,” he said. “We are always off doing something, kite boarding, surfing, hiking, something.”

List was in Montana most of the summer, Utah in November.

His coworkers don’t think it’s odd at all. In fact, they’re joining him. “I know about three other airline people who are starting to do the same thing,” he said. “They realized the freedom an Airstream can give you too. Once you work for this industry you realize how easily you can get around. You can take advantage of the opportunities and really enjoy them. This is a lifestyle industry and Airstream supports that.”

END_OF_DOCUMENT_TOKEN_TO_BE_REPLACED 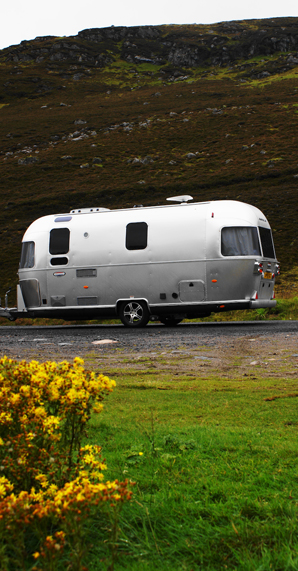 When Gordon Donaldson wasn’t holidaying in his native Scotland, he and his wife Angela spent time in the U.S., where a certain shiny highway icon caught his eye. “We admired these iconic Airstream trailers for years. We'd dream of taking a few months off and touring along the highways from Maine to Washington. We had a boring white-box caravan in Scotland and still had some great adventures in our home country. However, we found out that we could purchase a European spec Airstream and that's when everything really began,” said Donaldson.

“Everything” in Donaldson’s case was the purchase of 2010 Airstream International 534 for the couple’s old-country traveling pleasures. But that purchase was just the beginning: Donaldson now owns TrailerFlash, which rents a 534 out for excursions all over the island. “We wanted to share this experience and let others enjoy Scotland—the scenery, castles, restaurants—in the comfort of a silver bullet. Whether driving an hour away—golfing in St Andrews—or 10 hours away—walking in the romantic Isle of Skye—the Airstream experience is superb,” says Donaldson.

Though the company has only been in business for a few months, their customers are enthralled. As one of their site testimonials stated: “Wow, as cool inside as out. Chilled out all week in the great outdoors with all the comforts of a luxury pad.” And luxury pad it is, though the Donaldsons haven’t made any modifications to the trailer, which already includes items like a flat-panel TV and leather-upholstered lounge area. They do provide luxuriant bedding, outdoor furniture, and a generous welcome pack that includes a selection of Scottish delicacies including wine, local cheeses, shortbread, and as Donaldson says, “…and of course a fine dram of Scottish whisky from the local distillery to hopefully set the mood for a great vacation!”

The site advertises “bespoke itineraries,” where the company provides advice and bookings for local restaurants and special venues like distillery visits. One of the more striking Airstream vacations that could be had through TrailerFlash would have to be a trip to one of Scotland’s fascinating and beautiful islands. Some, like Skye, are famous and others like Mull and Harris not so much, but all are splendid. Most of those trips would require a ferry ride, which of course the company arranges, at an additional cost. Depending on the season, a weekly rental would be around $1,250 in U.S. dollars, with delivery costs extra. The company delivers the trailer to the agreed site, and doesn’t allow towing by renters.

Being the only Airstream rental service in Scotland doesn’t mean the Donaldsons will be resting on their laurels. They intend to have a range of Airstream models available as they move into the year. Donaldson knows they’ve got a good thing going: “Airstreams are just a totally unique American design. Our customers love the luxury inside and the way the silver bullets turn heads.”

It’s probably just as well that the renters don’t drive the trailers, with the temptation of that wee dram available. Heads will be turning, and happily so.

END_OF_DOCUMENT_TOKEN_TO_BE_REPLACED

Don’t Wait To Retire Before You Start RV’ing 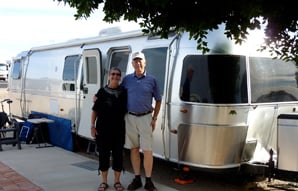 Carolyn and John Hacking did what they advise everyone they meet at RV shows to do: Start RV’ing early. Don’t wait until you retire. “Everyone always says they’re going to buy an Airstream and full-time when they retire. We tell them ‘Why not start now—at least by buying an RV and traveling part-time’,” Carolyn said. “Then when you retire you’ll know what you’re doing, whether you like it, and what kind of RV you want.”

The Hackings took their own advice and bought their first Airstream, a 1974 27' International Land Yacht they purchased in 1988. The couple, both former Canadian government workers, retired in 2005. They’re now on their 5th Airstream, a 2005 34’ Classic. Canadian residents, the Hackings head south for the winter each year.

“There are basically three choices for staying warm in the winter,” Carolyn said. “Florida, Texas or Arizona.” The Hackings like Arizona because of family and friends in the area, but they’ve been to California and Florida as well. Heading south later in the year means most of the usual tourist attractions are closed for the season, but the Hackings say there are still unusual attractions to explore. “We did find a psychiatric museum open,” she laughed. “It was interesting to see all the ways people used to be treated for mental illnesses, how they were treated and restrained.”

Retirement doesn’t mean life slows down. “John rides his bike every morning with some of the other men in the park, and we travel and do something just about every day,” Carolyn said. Having started traveling while they still worked, the couple got to see much of the United States long before they retired. When they finally did retire, they made friends and discovered places they wanted to spend more time visiting. “It’s one of the best advantages of starting early,” Carolyn said.

Don’t wait until you retire to try RV’ing. If you don’t like it as much as you thought, at least you know it early enough to plan on doing something else after you retire. If you love it, who knows? You may quit your job and find a way to do it full-time and discover a whole new life!

RVs don’t have as much closet and storage space as a house, but they should have enough for the clothing and items you need. Measure the width of the closet and count the drawers and storage. Compare layouts and take your time deciding. Sit down at the table, stretch out on the bed, stand in the bathroom, and generally just get a “feel” for the floorplan.

Don’t be afraid to sell your trailer after a couple of years if you’re not happy with it. You learn something new with each model you own and someone will be thrilled to have your trailer, just as you’ll love getting a new one yourself.