A Trip Back In (Trailer) Time

If you haven’t stayed in the Starlux Hotel in Wildwood, NJ, or in one of the hotel’s two Airstream trailers, you might want to book a room soon. The complex will be undergoing some major changes, and the Airstreams may be relocated. Starlux Hotel Manager Gordon Clark says the company plans to keep the trailers at the site, but they’re not sure if the set-up will be the same.

So break out your camera, your Bermuda shorts and straw hat and stay in one of the trailers while you can still be a part of the classic retro doo-wop history that Wildwood, New Jersey is famous for. The retro look is more than just a landmark look. In 2006 Wildwood’s “Doo-Wop” style motels were actually placed on the National Trust for Historic Preservations’ eleven most endangered list and described as “irreplaceable icons of popular culture.” 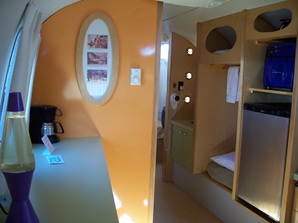 Clark said the hotel’s two vintage Airstreams have pretty much the same accommodations and dimensions of a standard Airstream, with amenities of a hotel room. “We love having them. They’re very unique,” he added.

With their classic curves, bold use of aluminum and glass, Airstreams have many of the notable elements of “Googie architecture,” also referred to as populuxe or Doo-Wop. Space-age designs that depict motion—like UFOs, boomerangs, atoms and parabolas—are all considered part of the Googie or Doo-Wop palate. Bathed in blue-neon and sitting in the shadow of the boomerang-shaped, slanted silver roof of the Starlux Hotel, the Airstreams are definitely part of the Doo-Wop look the hotel has going on.

“They were recently renovated,” Clark said. “They have the same footprint. There’s not much you can do to change that. They have a kitchen, bathroom—the same size as you’d have in an Airstream, but with a few updates to the interior.” 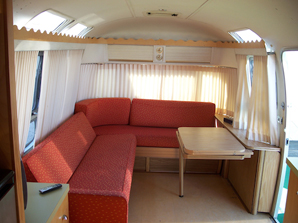 Whether you’re trying to satisfy a primal urge to spend 24 hours immersed in turquoise Formica, pink flamingos, or mint-green pastel wallpaper, or if spending a night in a vintage Airstream at a hotel on an endangered building list is at the top of your bucket list, you can scratch your itch at the Starlux. The Airstreams are positioned on a deck behind the hotel, and come with their own tables and lights, to give guests a pseudo-camping experience.

Not everyone who stays in the Starlux Airstreams is an Airstreamer. “Some people want to stay in the trailer, but some people sign up online and even though the website says ‘trailer’ they’re surprised when they get here that they’re staying in an actual Airstream trailer,” Clark said. “For others, it’s the last available room in town so they’ll take it. It’s a mix, really.”

Make sure you’re wearing a loud Hawaiian shirt or Bermuda shorts and your Docksiders if you want to be color-coordinated during your stay. Whether you stay in the 1957 Airstream Caravanner, or the 1971 Airstream International, you’ll be surrounded by astro-turf, blue mood lights and some eternal plastic palms that scream 50s retro, or George Jetson futuristic, depending on how you think of classic aluminum curves and sweeping lines.

Even if you never lived at a time when Airstreams, hep-cats, hippies and jewel-toned aluminum drink tumblers were in their glory, you’ll appreciate an evening surrounded by the pastel laminate and aluminum curves of a classic Airstream.