Bearing Up Well In A Japanese Airstream

The very real threat of Japan’s sometimes marauding bears is what drove Junichi Kanasugi and his wife and son to buy an Airstream. The family, who lives in Yokohama, Japan, used to be avid tent campers. But Japanese bears have found foraging near cities much easier than foraging in the dwindling wilderness.

Kanasugi says the family was never attacked, but they did yearn for more solid—yet mobile—walls around them. Four walls and a roof would not only allow them to enjoy the simple pleasures of staying near the places they love, they’d also be able to just relax. 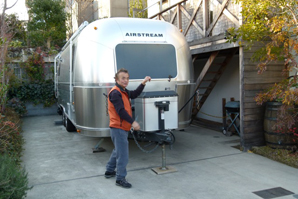 A little over four years ago, Kanasugi’s son convinced his parents to drive the 30 miles to Airstream Japan in Saitama prefecture, where they fell in love with a 2005 Safari. The Safari was the first of only 10 Safaris made to commemorate the 100th Edition sold by Airstream Japan.

Aside from special trim for the 100th Edition, the trailer is a standard model Airstream with no special modifications. The family can’t use the FM radio due to a different frequency spectrum in Japan, and there are only five campgrounds in Japan with 30-amp power service, but they love their trailer. 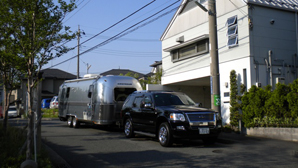 The Kanasugis had the sloped garden in front of their house dug out to make a parking space for the Safari, and then poured a concrete slab for the trailer to rest on. The space is complete with 30-amp power, fresh water and a sewage connection.

Speaking through an interpreter, the Kanasugis talked about the trailer. “Most of the time the Airstream serves as a spare room, sometimes for guests, or to relax. No working in here,” the elder Kanasugi winked.

Kanasugi pulls the Safari’s 2.5 tons with a Ford Explorer, left-hand drive SUV. The Explorer only adds to the curiosity factor of the set-up. In Japan right-hand drive is the norm. When asked what kinds of comments he gets from people, the elder Kanasugi laughed, “Many just say, what is this? They called this trailer many names: one guy jokingly called it coal-fired, meaning locomotive, and a third-grader called it a vacuum car, mistaking it for a sewage truck. At a highway service area, many bus travelers admire the vehicle.” 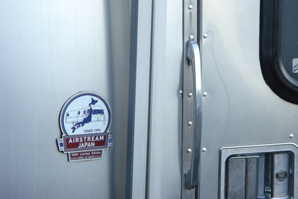 Most of the trailers sold in Japan are the 8-foot wide version, to comply with Japan's traffic laws, which reflect the narrower roads in the country. Like many RV’ers, Kanasugi would have really liked to have the extra six inches of width, but is happy with what he has.

Unlike America, a special license is required to tow the Airstream in Japan. “You need to obtain a special trailer license, normally following 12 hours of driving instruction on a school ground, costing a thousand dollars. Very few people in Japan find time to do this, next to a busy job with little vacation,” he said.

What does Mr. Kanasugi like about the Airstream? “Well,” he says, “Living in a trailer you are all on the same floor and keep close company with the family members and the dog, or with guests. You can move it any time. The body is airtight and silent, no worry about your party upsetting nearby people on a campground. You have all the convenience of modern lifestyle, yet can move your walls-on-wheels to a different place every day.” And, most important of all, “You are bear-safe.”