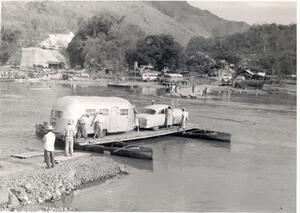 There’s always been a close connection between Airstream and the ocean, and that connection was born from the very beginnings of our company. Wally Byam was an avid camper and hiker, and that’s part of what led him to build the first Airstream trailer – but his spirit of exploration and his self-sufficiency in the wilds were both conceived from his love of the ocean.

Wally grew up on the Oregon coast, and from a relatively young age he had experience on the open sea. Sometime in his youth – perhaps during a break from his high school career – Wally spent time as a cabin boy, working on a boat making the trek from near his Oregon home to the frontier of Alaska and back again. In 1918 he joined the Seaman’s Union, and at some point around that time he made another long trip across the ocean – this time to Tahiti across the Pacific, a trip he would repeat decades later with his wife, Stella.

His experiences on the ocean inspired and influenced Airstream in a lot of ways. They helped him learn about leadership, and how to inspire others to do their best work. It also became part of our design – the space limitations on an ocean-faring vessel require efficiency and pose unique challenges to comfort, and Wally’s maritime adventures gave him insight as to how comfort and utility can be maximized in small spaces.

Wally’s life dream was to be able to build a yacht and spend his retirement sailing the Atlantic, Pacific, and the waterways of Europe. As he prepared to retire, the boat was built – sadly, by the time it was finished and arrived at its home port, Wally was terminally ill. He had the strength to walk the decks and take a trip around the harbor, but that was the only voyage he got to take on the Caravan. He passed away before he was able to live his dream.

That dream is part of the reason why Airstream has revived the Land Yacht concept. From top to bottom, the Land Yacht is designed with the ocean in mind, and is inspired by the world’s finest watercraft. Everything from the galley to the bedroom, from the upholstery to the woodwork has a sleek, sophisticated look that evokes quality, luxury, and the open sea. The spirit of Wally and of the Caravan are part of what makes the Land Yacht special.