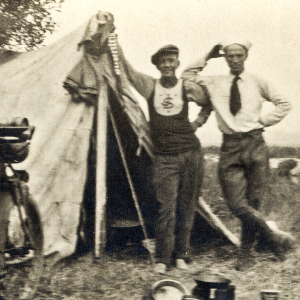 When an Airstream owner is approached by someone who recognizes it, the first comment is always, “Do they still make these things?”

The Airstreamer always says yes – they are manufactured in Jackson Center, Ohio. That familiar Silver Bullet, still seen on the byways and highways and on television. How often do we hear someone say, “What would Wally do?”

What did Wally do when he was guiding Airstream, leading Caravans and returning home? Two words: camping and hiking.

In this photograph, Wally Byam is standing in a very jaunty position with a sailor’s cap. This picture appears to be during his university days at Stanford.

His love of the outdoors began when he herded sheep for his grandfather in Eastern Oregon as a youth.

My first outing with Wally was a week’s hike through California’s Sierra Nevada Mountains.  There were five of us: Wally and Stella Byam, Clive and Gareth Glassey, and myself. Our hike took us over the two highest passes in the continental United States, the highest being the Mt. Whitney Portal Pass.

Wally had a storage area full of camping gear, both new and war surplus. His two burros were not just animals, they were family. Here was a man dedicated to camping.

It is no wonder that in the late 1920’s through the 30’s and until his death, Wally’s desire and knowledge from camping, as a seafaring sailor, and a shepherd drove his beloved Airstream functionality, design, and acumen.