The Riskiest Adventure, By Far 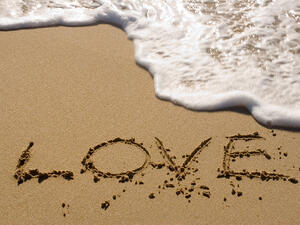 You know what kinds of things I’ve typically thought of when I ponder adventure? Boarding a plane. Embarking on a long drive. Gazing out a train window at landscape and horizon. Go, go, go. Do, do, do.

It seems glamorous or storybook, but in a way it’s also limiting, even finite.

Lately I feel called to expand into another dimension of this – let’s call it emotional adventure. I’m staking a different kind of claim here. One where instead of declaring I’m going to see X amount of museums or mountain ranges or gorgeously storied churches I’m going to plant a symbolic flag at my own soul center and signal a beginning to a new heart-centric adventure.

I know what I want and while for some it may not feel as daring as a steep climb up a rock formation or venturing to some far-off land, for many this is far more harrowing. How could I possibly write about adventure and skirt this whopper? So here it is -- I want all-out, come-out-and-say-it, take-the-risk love.

This desire has been building for a while, but was precipitated by two consecutive movies I watched on a flight back from Europe recently. The first was Sense and Sensibility. As the story culminates, there is a beautifully played scene where Elinor (played by Emma Thompson) starts crying uncontrollably when she finds out Edward (Hugh Grant) is not married. It’s so visceral and you don’t know whether to be mortified or thrilled for her.

As the scene advances, Edward says, “I-I've come here with no expectations, only to profess, now that I am at liberty to do so, that my heart is, and always will be, yours.”

The next in-flight movie I chose, Love Is All You Need, has a rigid, closed-off character played by Pierce Brosnan opening to love and then declaring it. Ida is thrown and tells him he can have anyone he wants. “I don’t want to be with just anyone,” he says.

Add these to a treasury of on-screen emotionally adventurous moments. Will expressing his love for Mac at the end of season two’s The Newsroom. “You own me,” he says. Castle telling Beckett she is the “most remarkable, maddening, challenging, frustrating” person he’s ever met. Fiction, sure. But isn’t that where so much of our scathing truth is found?

Emotional adventure via art and entertainment, often triggering in us what is long dormant or unacknowledged. Awakening something that prompts us to seize what we’ve long wanted, what we want to Live Riveted to. But it speaks to us more at certain times because perhaps only in that moment are we feeling ‘equipped’ for the adventure.

Those planes, trains and automobiles can take us to breathtaking places where we can create cool adventures to our heart’s content. But to go beyond content requires a pivotal addendum to where being risk-averse can take us – that place where we lay it all on the line and go for it. Or bust.

Pitter patter goes the heart. What an incredible rush.