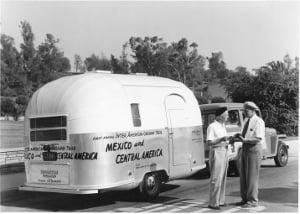 Wally Byam had ongoing financial difficulties in keeping the doors open at Airstream. Three times, he came back after his factory had been padlocked shut by the government. Wally had that unique quality to face adversity, conquer it, and move on.

In 1951, the status of Airstream was precarious. With encouragement from Airstream owners and his association with Trail-R-News (a trailer-oriented magazine) and with the Los Angeles Times, he planned to form a trailer caravan (open to all trailer brands) to Mexico and Central America.

Wally also saw the opportunity for publicity with this venture.  No one had ever gone from El Paso, Texas to Managua, Nicaragua with a caravan made up of travel enthusiasts. Airstream Wally Byam Caravan’s became a major advertising asset for the company.

This picture shows Wally Byam with Major Millender, Advance Man, going over details about the Caravan.

For an inaugural caravan it was as rough as you wanted. In a letter Wally wrote home from Guatemala City he said, "I have learned on this trip that difference between men is a matter of guts. I hate to go further. I hate to go back over these roads. I guess it is the same stubborn stick-to-itiveness that drove my forbearers west."

My firsthand experience on the caravan rates the Guatemalan roads as bad as any you'll ever travel. The washboard, ruts, dust and general disrepair on the roads were horrific.

Let’s go back to the financial status of Airstream. Wally received a letter from his office manager, Mildred, in Guatemala City. She told Wally, "you'll be pleased to know we made the last payment to the government."