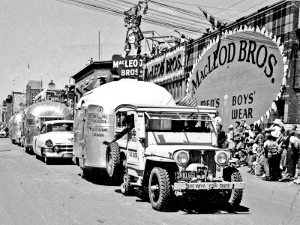 The Calgary Stampede was on the schedule for Caravanners. This world renowned event is one of many “treats” for the group. The Calgary Stampede is a ten-day event branded as "The Greatest Outdoor Show on Earth." It traces its roots all the way back to the late 1800s.

Everybody loves a parade, and Wally was no exception. As a child in Baker City, Oregon, he looked forward to their Fourth of July parades. Wally, born July 4, felt the parades were a special event celebrating his own birthday. As he grew older, he learned that the Fourth was a celebration of American Independence.

This love of parades promoted Wally to have a few Caravanners enter their Airstream rigs into the Calgary Stampede parade. The first vehicle pictured belongs to Don Waters, Wally’s advance scout for the tour. Behind Don’s rig is #1, Wally and Stella’s Airstream.

If you look really closely to the left, you'll see Wally walking alongside the Airstreams in his western wear and beret.