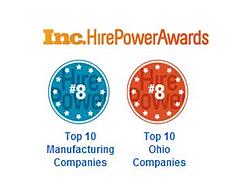 Guess which company is known for its iconic silver bullet shape, sports tons of rivets and was named as one of Inc. 2013 Hire Power Awards’ honorees? This one! Up against an impressive list of companies that are creating jobs--51,327 in 18 months, to be exact--and keeping the economy moving forward, Airstream ranked number eight in the Top 10 Manufacturing Companies and also Top 10 Ohio Companies.

According to Inc.’s Editor Eric Schurenberg, these companies are, “… at the vanguard of those who contribute most to America's economic vitality.”

Airstream is proud to announce that it created nearly 100 jobs in the past year. We’re full-steam ahead in production on both the travel trailer line and also the class B touring coaches and growing by the minute!