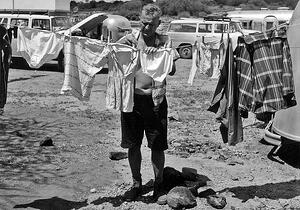 The Airstream caravan is about adventure. It's about experiencing life to its fullest. And it's about family.

This photo was taken during the 1959 Airstream Wally Byam Caravan. This is Al Frosch, and he's hanging up the family laundry.

However, the real story begins months before the Caravan begins.

One evening, Al came literally running into his home and announces to his wife, "Mildred, we are going to Africa!"

He had seen a Caravan that traveled through Mexico and Central America. The group, of course, was the Airstream Caravan, led by Wally Byam. So Al has decided their family will join the next one, planned to travel from Cape Town, South Africa to Cairo, Egypt - and beyond.

Al buys an Airstream and an International Harvester tow vehicle. So they're on their way to Africa.

Because their family lives on a farm, they can't just leave! So who is going to bring in their cranberry crop? Al needs to stay at home on their farm for just that reason. He must stay to harvest the cranberries, and does.

Therefore Mildred, with three daughters, a first time Airstreamer, sails for Africa. It will be several weeks until Al catches up with the Caravan.

I just love their story.

Al had the confidence that his wife could manage with his three daughters in Africa until his arrival. The youngest Caravanner was Susan Frosch, at just six years of age.

There is no doubt that a farming environment and family exercise a can-do spirit. (Even with the father hanging up the laundry.)

Airstreamers have so many experiences whether traveling cross Africa, Asia or the United States. The Airstream has that magical quality that opens your life for new friendships, and adventures.  A wonderful life!