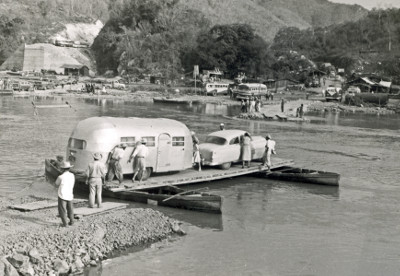 Wally Byam wanted Airstream owners to enjoy the world. He wanted them to experience a sense of adventure, freedom, and excitement throughout their lives.

Their highways were paved, cobblestones, dirt, washboards, rocky, rutted, and sand. When there were no roads, the Airstream Caravans made it through anyway.

This early picture from 1951 points out that even the most primitive ferry boat couldn’t restrict the Caravan from getting through.

Wally was a leader. He had that unquestionable charisma and that quality that made you listen - and that encouraged everyone to make it through even the most dubious circumstances. It isn’t just a primitive barge taking you across a river, it is a memory that you will share with your grandchildren.

The Airstreams through the years were road-tested under harsh conditions that lead to engineering changes improving the product.

Airstreamers are fortunate in having a product that has been road tested world-wide over many decades.

Wally Byam believed that making improvements is the key for customer satisfaction, and a world class product.  As a world recognized icon, Airstream has lived up to Byam’s belief.