Airstream, the Vanderbilts, and politics 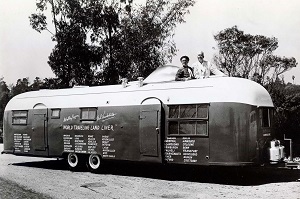 In the early 1920’s, Wally Byam met Cornelius "Neil" Vanderbilt, Jr. for the first time. Their friendship would last for the rest of their lives.

In 1948 the two men toured a Europe still recovering from World War II with an Airstream. Vanderbilt, as a writer and ‘filmographer,’ recorded the aftermath of the war through journalistic eyes.

Wally and Neil designed the Commodore together. This state-of-the-art Airstream would then appear in Chicago during the Democratic and Republican Conventions of 1952.

It was party time, and it not for political parties - it was a time of entertainment and socializing with the elite. The bluebloods that only a Vanderbilt could invite. Wally must have been thrilled meeting the members of Neil’s social circle.

We all benefit from experience, and surely Wally got plenty of it in Chicago that year. There is no doubt that Wally acquired new skills in dealing with an elite segment in American society which would help him later.