Going to Africa takes planning - but it's worth it 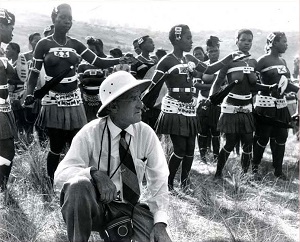 There are endless hours put into planning, executing, and getting on the road for an Airstream Wally Byam foreign Caravan.

Up until 1959 Caravans were mostly traveling through Mexico, Central America, Canada, and Europe. When Africa went into planning the details had to be meticulously crafted. Considerations were many dealing with nations, cultures, religions, roads, significant events, and planning for the unexpected. It was no easy task, considering they were traveling from the converging waters of the Atlantic and Indian Oceans, to the Mediterranean Sea.

In 1959 the Shembe Festival was held near Durban, Natal, in the Union of South Africa. Wally Byam had it marked as one event not to miss during the Caravan's travels through South Africa.
The festival was named after a Zulu Prophet, Isaiah (Isaya) Shembe. It is a religious gathering, combining Zulu traditionalism and Christianity.

Wally Byam put on his pith helmet, grabbed his camera, and became a Caravanner for the day.
The dancing is traditional with lines of dancing Zulu maidens, and skin clothed Zulu warriors with shields and sticks. The sounds echoed with chants both ancient and modern. Rhythms were kept synched with drums and clicking sticks.

An event like this is always long in the planning, but makes for an everlasting memory.