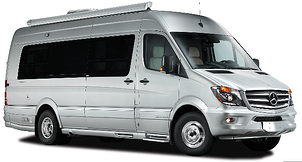 Have you ever experienced the Airstream Interstate? Well, we recently announced that our Interstate is the #1 selling Type B motorhome in the U.S. for the third year in a row, according to Statistical Surveys Inc. We're honored to receive this title and couldn't do it without your help! Check out the details below to learn more about the Interstate and this award.

Jackson Center, Ohio (February 19, 2013) – Airstream announced today the brand’s popular Interstate is the #1 selling Type B motorhome in the U.S. for the third year in a row, according to Statistical Surveys Inc., the premier provider of RV market intelligence. In 2013, Airstream Interstate unit sales increased 48 percent over 2012 – nearly three times the overall segment growth which was up 15.9 percent year over year. The Interstate now has nearly 23 percent market share in the touring coach segment.

“The momentum we gained in 2011 and 2012 has carried us for another year,” said Airstream CEO and President Bob Wheeler. “To keep things rolling, we unveiled a new Interstate model at the end of 2013 in an effort to enhance the product and experience for our buyers. We think these changes will only magnify interest as we move into 2014.”

The Airstream Interstate motorhome continues the tradition of extraordinary design and handcrafted quality that has made Airstream a style classic for 82 years. It serves as a fuel-efficient, luxurious and safe way for travelers to explore the open road and includes nearly two dozen “Best in Class” Mercedes- Benz features, enhancements and a renewed commitment to safety and refined luxury. The Interstate has a MSRP of $146,300, and $149,006 for the EXT model.

“Our dealers are also very instrumental to the success of the Interstate, and we appreciate their hard work over the last three years in helping Airstream maintain the top retail spot for B Vans,” said Wheeler

Airstream had a record-setting 2013, making it the best-selling year in the company’s 82-year history. The demand for Airstream’s design-driven products led to the company’s largest backlog in more than 30 years.

For more information on the Airstream Interstate visit http://www.airstream.com/.