Wally and His Majesty the Ethiopian King 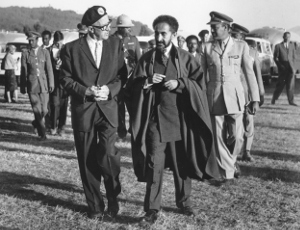 Imagine this: the Airstream Wally Byam African Caravan in Ethiopia. It's 1959 and His Imperial Majesty Haile Selassie I, Conquering Lion of the Tribe of Judah, King of Kings of Ethiopia, Elect of God is with Wally Byam, Founder of Airstream. The two are walking the Caravan's campground together.

Earlier that week, the Caravan was hosted by His Imperial Majesty in his palace. Each member of the Caravan shook hands with Haile Selassie, who spoke through a translator with the adults and spoke to the children in English,

The Caravan parked at the prestigious Royal Race track grounds. We enjoyed a beautiful manicured area, in a relaxing surrounding.  Every day just after sunrise, the Royal Palace guards walked the palace lions on sturdy chains through the racetrack grounds.

At night, our campsite erupted with the sounds of hyenas laughing and fighting as they scavenged our large garbage pit.

For readers that have studied history (or that lived through these events), the invasion of Ethiopia by Benito Mussolini made our journey through this mountain nation a reality check about the horrors inflicted on the people.

Newspaper headlines covered the June 30, 1936 speech by Haile Selassie to the League of Nations in Geneva, Switzerland. The highlight from his speech was at the very end when His Majesty said, "It is us today. It will be you tomorrow."  How prophetic.

Ethiopia was invaded by Italy on October 3, 1935. The Ethiopian Army, ill-trained and poorly equipped, faced the Italian Army that was well-trained, equipped with better arms, and possessed superior tactical skills.

Shocking news came from the battlefields that the Italians employed poison gases to subdue and kill Ethiopians. After poison gases were prohibited after the First World War, their use was universally condemned, as was the invasion.

The truth was very clear that sanctions on Italy were ineffective. The League of Nations showed that they had an inherent weakness politically and were incapable to stand up and protect Ethiopia and any other nation.

And yet, I look back at my wonderful experience in our journey through Africa to travel through Ethiopia, and meeting His Majesty Haile Selassie, with fondness. They were a kind and hospitable people, still welcoming 20 years after such a horrible turn of events.

Wally Byam opened the doors for so many wonderful experiences. Looking back, it was amazing that one company, Airstream, and one man, Wally Byam, made all of this happen.  Thank you Airstream. Thank you Wally.