The African Adventure: from New York to Cape Town 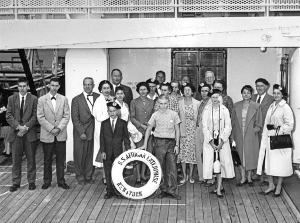 We were journeying to the most formidable continent on Earth. A place of beauty, culture, and history.

A straight-line distance from New York to Cape Town is 7,800 miles. With our two island stops, the mileage was probably a few hundred miles longer.

The Airstreams and tow vehicles went by sea from North America to Cape Town. A few Caravanners, including Wally and Stella, flew to Cape Town.

I sailed on the African Enterprise, owned by the Farrell Lines. Eighteen days sailing the Atlantic Ocean from north to south, experiencing food fit for royalty. Seeing the Southern Lights for the first time, crossing the equator, and watching with amazement when sink water changed from clockwise to counter clockwise.

Caravanners made up one-third of the passenger roster. This gave us the opportunity to get to know each other and to talk about the adventures ahead.

My cabin housed three people including myself, Dale "Pee Wee" Schwamborn, age 20 and lead scout. I lived with Bob Nolte from Montana, 18 years old and traveling with his grandparents, as well as Nick Charles, the 17-year-old son of Andy Charles, who was at that time President of Airstream in Jackson Center, Ohio.

While I can't give away too many details, you must understand: confined for over two weeks, three young men can find many ways to entertain themselves.

Here is an example. There were two daughters traveling with their parents to South Africa. The father had accepted a professorial position at the University of Stellenbosch. We made a stop to unload needed materials at Ascension Island. I then convinced the two young ladies that Ascension Island was built and secured on pontoons. It was created during the Second World War with a combined effort between the United States and the United Kingdom. This misinformation lasted only a few days until the father set the record straight.

The Cape Rollers is the meeting of the Atlantic Ocean and Indian Ocean converging upon each other. This is a phenomenon introducing ship passengers to leaving one ocean to the other as they approach Cape Town.

Your ship begins contorting up and down, and around all at the same time. It lasts for only a short period, but has the roughness to wake you up.

At last the African Enterprise had reached Cape Town.