The Blue Beret and Airstream Goodwill 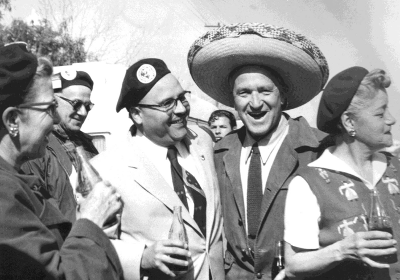 Why did Wally Byam get involved with head coverings?

In 1948 he and Cornelius Vanderbilt, Jr. toured Western Europe. On that trip, Wally was introduced to the beret. He found it covered his head, kept it warm and could be folded up and stuck in his pocket. Very simply, he found it to be practical and convenient.

The beret became part of the Byam persona. Friends, Caravanners and Airstreamers followed suit and adopted the “Blue Beret” as a tribute to Wally.

On Airstream Caravans, the beret announced to local citizens that the Caravanners were an American group traveling through their town as friends and ambassadors of goodwill.

Wally always made it a point to take a blue beret from his pocket and gently but firmly put it on an official’s heads when introducing them to the Caravanners. These gestures made so many dignitaries feel like a part of this American contingent, which opened even more avenues to the group.

Above, the mayor in one Mexican town shares a soft drink with Helen Byam Schwamborn, Wally, and Stella Byam. Wally performed his induction into the Caravan with the mayor by placing the blue beret on his head. The mayor, in turn, has made Wally a citizen in his city with a traditional Mexican sombrero.

There is no doubt when Caravanners went shopping the local merchants were well aware that an Airstream Caravan meant an increase in revenue. For the local citizens, they were meeting new and gracious friends wearing blue berets.

Times change and the blue beret is worn by very few today.  But Airstreaming continues on with the same noble attributes steeped in friendship, and merchants always invite Caravanners to shop locally.

Airstreamers don’t wear bird nests, but they certainly have accumulated flamingo flocks to represent the recognizable change that has evolved.