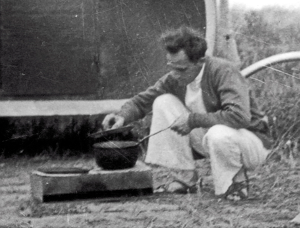 Grub is a word from the 19th century that means gourmet, not a small little worm or a prospector wanting a grub stake to search for gold. Grub is normally reserved and associated with beans, salt pork and hardtack.

Grub was Wally's word for a meal, going shopping for food, or even going to a night club for dinner and entertainment. More than once during a Caravan potluck, Wally thanked the ladies for the wonderful grub.

Wally once herded his grandfather’s sheep for a full summer. There is no doubt that outdoor cooking became a part of Wally’s life during this period.

In the early 1930's, Wally went camping with friends and family in Del Mar, California. He provided Airstream Torpedos and tents for the gathering. He was a great host - he also provided the meals (or, as he said, the grub). Back then Dutch ovens were used and today it is still all the rage in the Airstream world at events.

Wally wrote about five personal memories. One of them is a one-line incomplete sentence without an explanation. He wrote, hunting bear with father.

There's no doubt that his familiarity with cooking led to outfitting Airstreams with cooking areas, scaled down, but that enable Airstreamers to prepared even the finest meals.

While the Second World War was raging, Wally worked at Lockheed Martin in Burbank, California. He also looked forward to opening a camping outfitters store, an extensive camping mail order catalog, and to write the consummate book on camping, and hiking.

From his notebooks I have extracted only two cooking instructions that Wally believed to be helpful to campers. There is no doubt that Wally understood cooking.

The first: Ground dates are cheap and good sweetening for apple sauce. (Would like to try some.)

And the second: Might be a swell idea to mix dehydrated vegetables, potatoes, a little soybean flower, dry milk and chopped dried beef (pemmican) to mix with and stew up for a one dish meal. (Excellent!)

And another non-cooking insight: Bell for burro at night is a safety measure. (You betcha!)

Though the last comment is not cooking it does deal with camping. Wally had two burros, so it made sense to protect them.  It would be many years before the movie Fargo was released, but you just have to love Wally using the colloquialism you betcha.

In the mid-1950’s Stella Byam wrote to Helen Byam Schwamborn, "Did you know Wally has a recipe for Sourdough Bread?"

I don’t think anyone who knew Wally was ever surprised to his knowledge.  He truly had his "bases covered," his "ducks lined up in a row," and a "full deck of cards."

Today, Airstream keeps up with our need to cook meals. When microwaves became practical in size and utility, Airstream added them to the galley. Whether you're in Africa, Alaska, or visiting Glacier National Park, you can create a five-star meal served with memories and enjoyment that are afforded as your travel with your Airstream.