This article is a continuation of the previous Airstream Caravan journal, published on April 10. 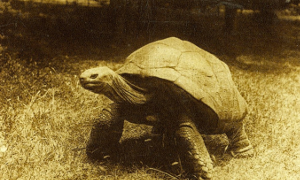 When we left the New York docks, we were thinking about the African Caravan, and not landing on St. Helena. We were able to go ashore and spend several hours roaming the small rocky island certainly a travel gift.

This is the story of Old Johnathan, a two hundred year old land tortoise, and the exiled despot Napoleon Bonaparte.

The British determined that Napoleon would never return to Europe sailed him to St. Helena, an island so remote that his return to France was impossible.

This quotation from a timeline is a graphic picture telling about the life-obscure for Napoleon.

Napoleon's final home was Longwood, a stark reminder that his isolation was irreversible. Two items that were interesting was a very old globe turned to the African continent. The African continent is marked as 70% unknown. Now our Caravan was on its way to areas only explored during the last 145 years.

The other item that had a lasting memory was his death mask, a somber reminder than even Napoleon was mortal. His death became history alongside the destruction he caused in Europe.

Nearby Longwood, we visited Old Johnathan. This ancient tortoise lived on St. Helena before Napoleon’s arrival and outlived him. Mute to the past, this living creature co-existed with the "emperor" and frequently saw him during his exile. Amazing!

You measure suffering in wartime with the dead and missing. Inclusive numbers counting both military and civilian, the Napoleonic Wars tallied over 3,500,000.

Visiting St. Helena, a remote infrequently visited island, is that once-in-a-lifetime event. Each Caravanner left the island grateful for the experience and opportunity to visit the island, the tortoise and understand Bonaparte’s last days.