This article is a continuation of the previous Airstream Caravan journal, published on April 17. 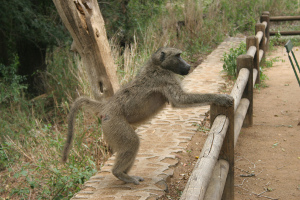 What is the main attraction in Africa, south of the Sahara Desert?

The land of Africa is one with nature, and the animals roam the Earth freely, with grace.

It is possible to account for almost every animal you might find in a zoo in sub-equatorial Africa. With animal abundance and economic hardships there are poachers harvesting animals at an alarming rate. Trophy hunters are rapidly losing their respect in their hunting and killing African game. This comment is a red flag, making you aware that times are changing in Africa.

Nick Charles and I left early from Pretoria, South Africa heading for Kruger National Park. We set up several campsites on our way to the park.

We reached Kruger after admittance hours and found it necessary to park alongside the road for the evening, near the main gate.

During the night, at unscheduled intervals, we heard chilling sounds: lions roaring. The roar of an adult male lion can project for over five miles. There is no doubt that the reverberation produced by a lion not only keeps you not just awake, but alert to pending danger. There is no danger in Kruger, where they are on the other side of a fence...or is it possible they roam along both sides of the fence?

We woke up early in the morning to a wonderful sunny day and several native youths outside the Scout truck.

In Johannesburg, I purchased a battery-operated record player. It came in handy many times throughout our trip. In this case, it was taken from the truck and a Louis Prima record with upbeat, uptempo sounds and great drumming that entertained the youngsters. Music is an international language when you don’t speak a local dialect.

Immediately upon entering the park and stopping at the park headquarters, a baboon jumped on the truck’s hood. They are dangerous animals. I once heard a story of a baboon group that killed a leopard, and in the park they have actually abducted a small child.

After a half-century, the lions roaring still bristles the hair on my arms. In life, some memories never leave your senses.